Windows provide a lot of valuable contributions to your home, views, light, ventilation, but they also are responsible for the biggest wastage of energy. Glass is a very poor insulator as it naturally conducts heat through it and windows have been estimated to account for around 25 percent of all wasted energy nationwide and 10 percent of carbon emissions. Although many window treatments and coverings are put in place for aesthetic reasons, privacy and security, with a bit of know-how they can be a wise investment to effectively block the transfer of heat when temperatures are peaking, keep your house more comfortable, conserve energy and keep your power bills lower. 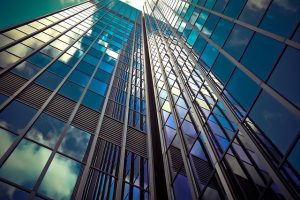 These films are designed to block sunlight and prevent heat gain during the summer. Their functionality is determined by a number of factors, including the climate of the area, the orientation of the building, and the size and the orientation of the windows. Climates like in Perth, Australia with long hot summers where people are heavily reliant on air conditioning benefit more from window tinting their home. Films that are silver colored with mirrored surfaces tend to block more heat than those that are either transparent or colored. The films are particularly useful on windows that face east or west because these windows are more difficult to shade from the angle of the sun as it rises and sets. They can reduce the amount of light in the house, reduce outside visibility, and are not the best choice for windows facing the equator as they will stop the sun from warming the house during winter. They can however be used on the inside of double glazing to help stop heat loss in the colder months. They can either come as part of prefabricated windows, or they can be bought separately.

Roof overhangs are one of the best solutions when it comes to providing shade for windows that face the equator (south in the northern hemisphere and north in the southern hemisphere) during the summer. When they are properly designed, they are the right dimension to block direct sunlight from the summer sun, but during winter allow sunlight to stream in and warm the house because of the lower angle of the sun at that time of year. The design of overhangs requires a bit of technical expertise because the type of window and the climate and latitude of the area have to be taken into account. As it is rather difficult to add overhangs to a house that has already been constructed, this is an opportunity that really needs to be embraced when designing a new house or extension. 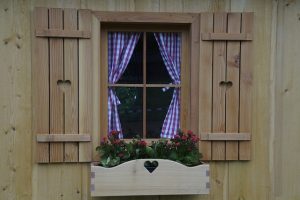 Interior shutters provide weather protection and added levels of security but they will use up some of your interior space. When you install them, you have to clear up some space around the windows to allow access to them.

For their part, exterior shutters should be part of the initial design of the house, because it is hard to add them to a preexisting house. Since exterior shutters have to be operated from inside the house, they are installed with a complex mechanism, which has to adhere to the fire codes in your area. Traditional roll down metal shutters protect your home, but they are not designed for optimal energy conservation.

The colour of your drapes and the fabric with which they are made determine how good they are at reducing heat loss. A combination of medium coloured curtains and white plastic backings can block up to a third of the heat that gets through the windows during the summer. The folds and pleats on the drapes help cool the house by convection. Keep your drapes drawn in the summer to reduce the incoming heat. By keeping the drapes closed at night during winter, you can reduce the loss of heat by up to 10 percent.

Hang your drapes as close to the windows as possible and let them fall onto the floor or the windowsill if you want to reduce the exchange of heat. A pelmet or a cornice should be positioned at the top of the drapes, or the drapery should be attached to the ceiling. Ensure that the drapes overlap in the middle of the window and that they are sealed on both ends. This will cut down heat loss by a quarter. To increase the amount of heat that is retained during the winter, you can use double layers of drapes on the windows, as this will increase the layers of insulating air pockets. 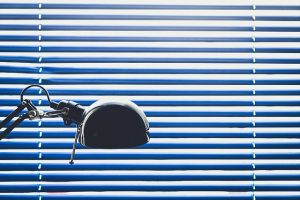 Roller blinds are very effective in saving energy if they are installed properly. During installation, you should ensure that they are positioned as close to the window panes as possible and that the shades are also close to the walls, so that the airspace in between is completely sealed. During the summer, ensure that you lower the shades to block excess sunlight. Some special roller blinds come with multiple layers of fabric and padding which also reduce air infiltration by simultaneously acting as air barriers and insulation. 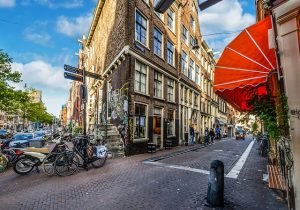 Awnings reduce the amount of heat that enters your house during the summer. The ones present in the market today are made of synthetic fabric which can repel water, retain its original color, and resist mold and mildew. Awnings can block heat from the sun by about two thirds for southern windows and more than three quarters for western windows. Awnings are more effective in blocking solar heat when they are tightly woven or opaque. Dark colored awnings tend to absorb heat, while lighter ones are better at reflecting most of the sunlight. Awnings should be ventilated to prevent them from acting as heat traps. Some awnings are adjustable so that they can be retracted during the colder seasons to allow the sunlight to get in through the windows.

To get the most out of your efforts to shade and insulate your windows, you will still need to seal the gaps around the edges of your windows to prevent drafts from sucking currents of air in or out of the house. In order to adequately prevent the infiltration and leakage of air, you need to weather-strip or caulk your windows.